This restaurant recipe is for a Molded Cranberry Salad. 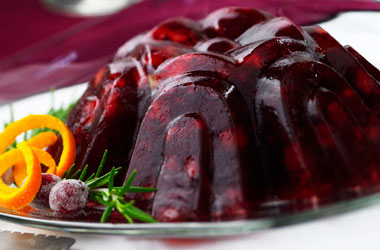 Quite frankly, this is an item I rarely make today - not because this isn't a good tasting salad, but because many that were made in the '60's and '70's were nothing to brag about. In fact, many were terrible.

Having said that, older customers who are sponsoring a group meal (meeting) at the restaurant sometimes ask for a molded gelatin salad. This recipe "works."

This can make a nice centerpiece for a large holiday party, if you use a mold.

Otherwise you can cut the salad into individual portions from an 8 X 8 inch pan or see another serving option below. It is delicious and healthy.

I like either walnuts or pecans in this recipe but you may substitute your favorite or you may omit the nuts altogether. 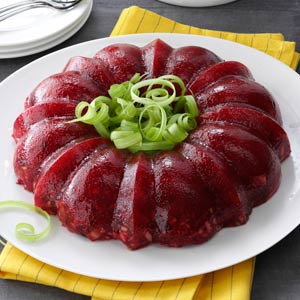 Cranberries are a native fruit in America and are commercially grown in my home state of Washington.

Depending on the year, Washington is the fifth or sixth largest producer of cranberries in the States.

Cranberries were first used by Native North Americans, who discovered the wild berry's versatility as a food (especially in pemmican - a combination of dried deer meat, fat and cranberries), fabric dye and as a healing agent. 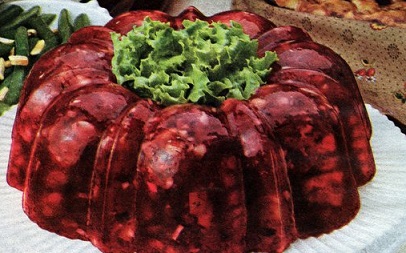 The name "cranberry" derives from the Pilgrim name for the fruit, "craneberry", so called because the small, pink blossoms that appear in the spring resemble the head and bill of a Sandhill crane.

Today cranberries are farmed on approximately 40,000 acres across the northern United States and Canada. 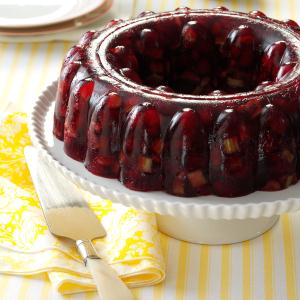 
Did you know? In Utah where Jell-O is the official state snack, these molded gelatin salads are available in many local restaurants.

Back to Restaurant Salad Recipes